Inquire about our weekly specials.

By Borrowed from Megan Richards 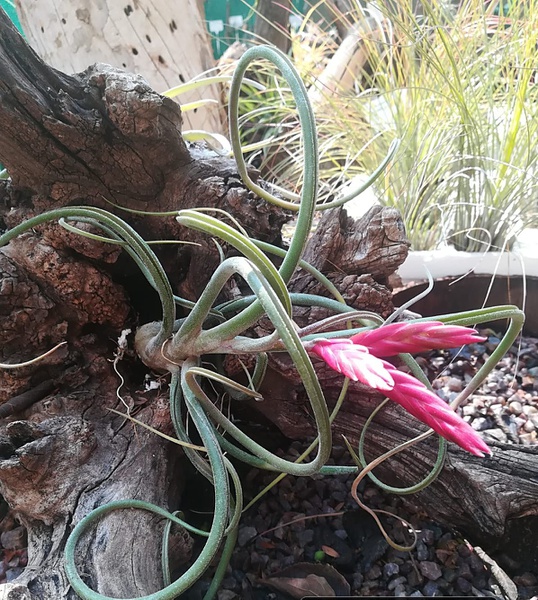 1. Air plants are epiphytes and can also be lithophytes. An epiphyte is a plant that grows on another plant, like a tree branch or bark, but is not parasitic. They use their roots to anchor themselves rather than for nutrient uptake. They get their nutrients from the air, rain, and dew. A lithophyte is a plant such as moss or lichen, that grows on or among rocks or sand. There are a few “xeric” varieties of air plants that are also lithophytes that use trichomes to absorb moisture from the air.

2. Tillandsia (air plants) are members of the Bromeliad family which makes them close cousins to pineapples.

3. Air plants use trichomes to absorb nutrients and moisture from the air.  Microscopically, trichomes look like little cups that open and close to absorb and retain moisture. You might notice that some air plants are “fuzzier” than others, and this is all due to trichomes. These fuzzy plants have adapted to have more trichomes in response to dry climates and environmental conditions.

4. Air plants are unique in that they use CAM photosynthesis to exchange gases and “breathe” at night, which is different from most plants that do this during the day, and use sunlight for photosynthesis.

5. Tillandsia plants are found in many climates and environments from humid rain forests, high cloud forests, deserts, coasts, and mountain sides. Because they are found in such diverse climates, they have adapted to thrive in these sometimes harsh environments.

6. Interestingly, most air plants don’t bloom flowers that are scented. Though there are a few that do have scented flowers and produce some of the most delicate scents like the citrus blooms of the T. diaguitensis , and the nutmeg scent produced by the Tillandsia cyanea.

7. Air plants grow offsets (pups) after blooming. The mother plant will often die after producing pups, and these can be removed when they are ⅓ the size of the mother plant. If left to grow they will form an impressive clump over time.

8. Some air plants have pseudobulbs, such as the T. caput medusae, T. seleriana, T. pseudobaileyi, T. butzii, and T. streptophylla. A pseudo bulb can be defined as a pronounced bulbous base that forms a bulb shape. They are considered pseudo bulbs because most have empty cavities inside, where in the wild, ants form colonies.

9. There are many hybrid air plants. The majority were hybridized by botanists and horticulturalists, but there are actually some that are naturally growing hybrids. The T. rectifolia is a naturally occurring hybrid between T. ionantha and T. schiedeana. This is considered an “introgressive species,” since it is a natural hybrid that has become so numerous that it is now considered its own species!

10. One of the most popular air plants, the T. xerographica was almost poached to extinction in the 1980s. Since then, growers and exporters have had to adhere to strict regulations for the export and trade of these plants.

Sign up and you will be the first to know the latest news, insider-only info, and more.